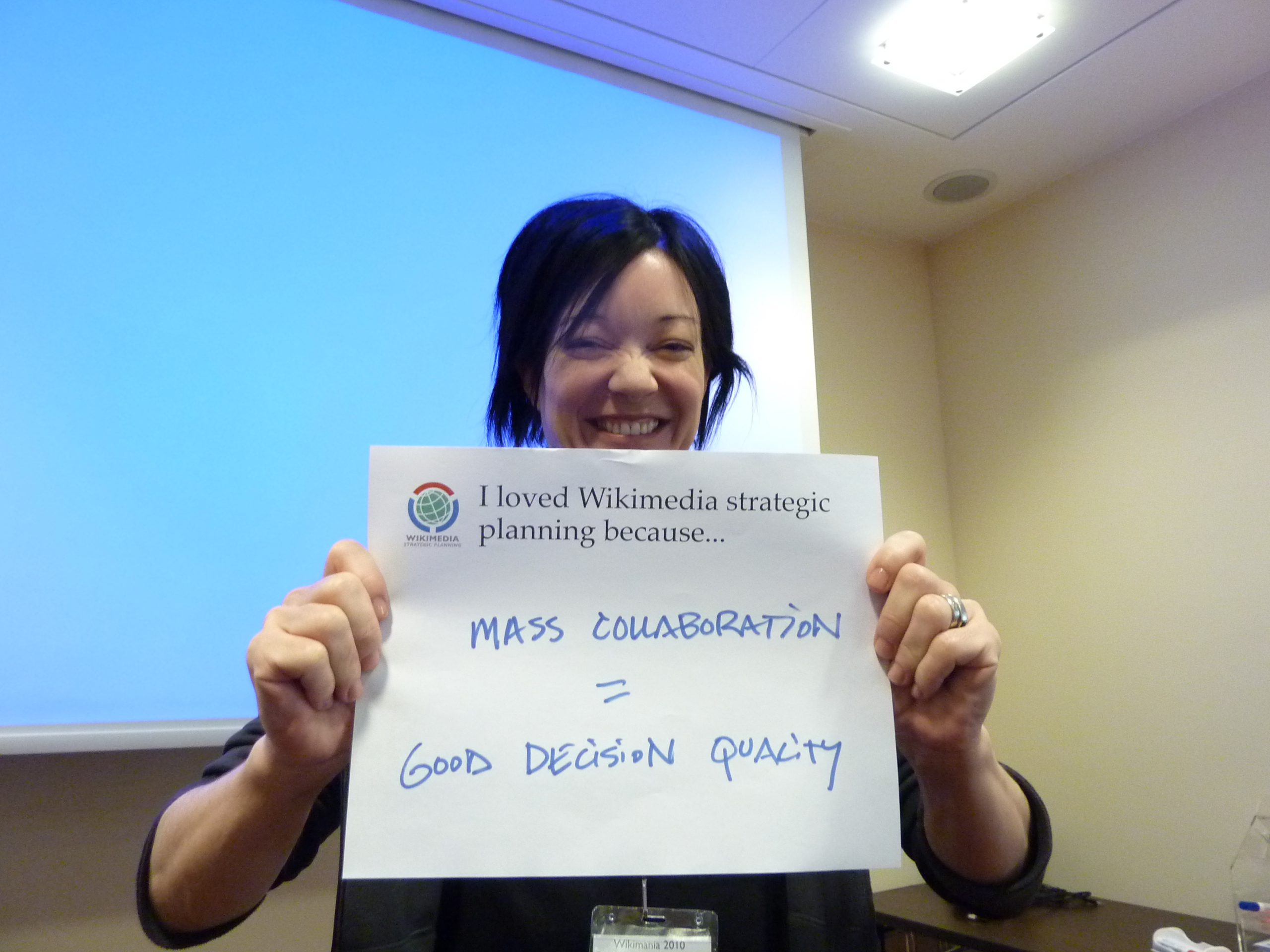 I’ve had many wonderful responses to my post from earlier this week, where I described the real value of networks as a “lens that helps us better understand power.” I wanted to build on this post by sharing some examples of how I’ve applied this lens in past work. I want to specifically focus this post on the hairy challenge of enrollment in networks (and organizations).

In 2009, I designed and led an open strategic planning process for the Wikimedia movement. Typically, developing strategy is a process that is limited to a select few — in organizations, formal leadership. Even if we had wanted to do that (which we didn’t for a variety of reasons), it was clear that such an approach would not have had any teeth.

Suppose we had tried. Who would have been part of that select few? If we were to apply a narrow, organizational lens, we could have concluded that the executive leadership at the Wikimedia Foundation — the organizational steward of the movement, which at the time had 35 employees — should be responsible for developing the strategy.

This would have made no sense. While the Foundation controlled the trademarks and was the fiscal sponsor of the movement, it did not play any direct role in the editing or management of Wikipedia. Wikipedia and its sister projects had started and had become successful well before the Wikimedia Foundation even existed.

If the leaders at the Wikimedia Foundation had decided to create a strategy for the movement, who in the movement would have listened? Certainly not the majority of editors and developers who make Wikipedia work, many of whom — even now — are blissfully unaware of the Foundation’s existence or of its role. What good is a strategy that isn’t known or being operationalized by the people needed to make it happen?

It’s not that the Wikimedia Foundation leadership didn’t have power. It’s that power was distributed throughout the system, and that the Foundation had limited ways to wield its power. In fact, much of the Wikimedia Foundation leadership’s power had nothing to do with formal authority and everything to do with the relationships and trust they had built with community members. (This is one reason why the Foundation’s current search for a new executive director has been so challenging. It needs to find someone with the skills to lead a 150-person technology and new-media organization and also cultivate strong relationships with the Wikimedia community.)

Fortunately, the leaders at the Wikimedia Foundation understood all of this. They knew that any strategy that meant anything would have to be developed in a participatory way, that the people who made Wikipedia would have to own it. They were also in the exceptional position of being stewards of a community that understood large-scale, collaborative production better than most, so they knew that developing strategy this way should be possible. The challenge was how.

Obviously, we faced many challenges that were unique to the Wikimedia movement. But the reality is that this is a story that applies to every network, including organizations. How many people know what their organization’s strategy is, much less help their organizations implement that strategy? How could this be a problem in organizations where the power is clearly centralized?

Because it’s never that simple.

I spent much of 2011 helping the CIO of a global pharmaceutical organization improve collaboration both within his IT department (consisting of thousands of people all across the world) and across the organization as a whole. Most of our starting assumptions about what to do and how to do it were wrong, and it all had to do with my naive understanding of power in the organization.

We had created a highly iterative process to help groups within the company experiment with ways to improve their collaborative performance. It strongly resembled the Lean Startup methodology, with which I was not familiar at the time. (Eric Ries published his book, The Lean Startup, in late 2011, although he and an already burgeoning movement of practitioners had been blogging about it for several years.)

The CIO and his team had bought into the process and was picking up my team’s cost for any group in the company that wanted to participate. For a variety of (mistaken, as it turned out) reasons, we wanted to recruit pilot groups outside of the IT department. We were confident that our approach would immediately result in quantifiable improvements in collaboration. “All” it would cost the groups was their time to participate.

We spent three months making this pitch to several groups, and we got zero takers. We had lots of executive support, and we had no lack of meetings with decision-makers. We had some very good candidates, but the timing wasn’t quite right for them. We decided to shift our focus on groups within the IT department (where the CIO obviously had more direct leverage), but I don’t think this would have been necessary if we had had more time.

But that’s the point — time. Even though the CIO was picking up our costs (which were considerable), participants would have to invest their own time. Even though we had executive blessings from their division heads, those leaders weren’t creating additional time for the groups to participate (which, in theory, they could have by taking something off their plates). That meant that pilot groups would have to find their own time to participate.

Having executive support was a huge leverage point, but it was not sufficient. Our whole process was designed around network principles, but we had wished away the hardest part of any network project — enrollment — because we had a naive, organizational view of what would be required to get people to participate.

In my previous consulting company, we only took on projects sponsored by executive leadership, yet we faced this enrollment challenge every single time, regardless of whether we were working with an organization or some other type of network. We always had to figure out the leverage points beyond positional authority, and we had to design a process and space that would compel people to participate.