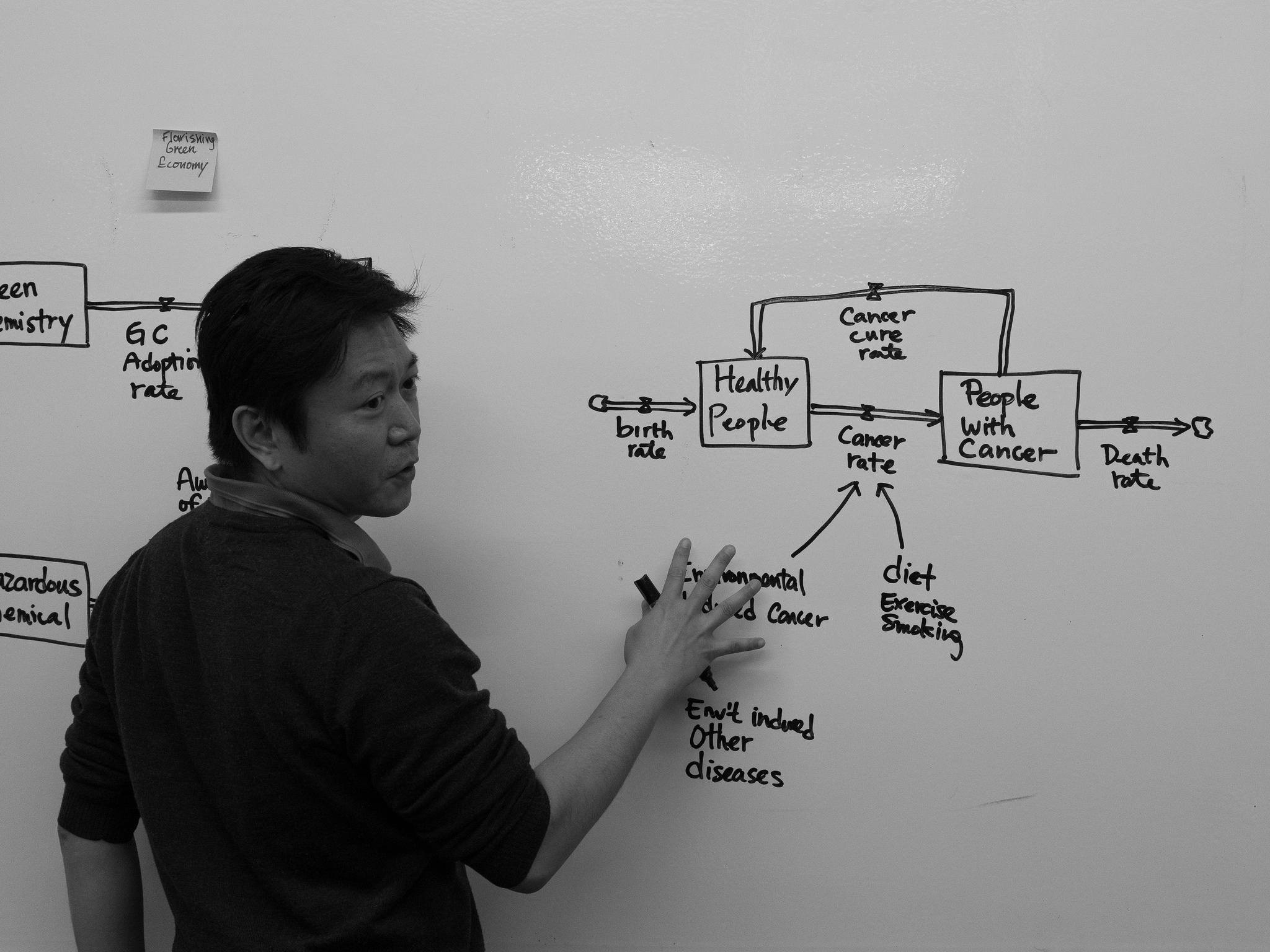 I’m facilitating the kickoff of the Garfield Foundation Collaborative Networks initiative later this week. In one of the modules, I’ll be asking people to share their theories of change for the challenge we’re all tackling. You can imagine an exercise like this with a room full of veteran changemakers going for hours and hours, but we’re limiting it to 90 minutes.

The primary goal of the exercise is relational. It’s for people in the room to start developing a more explicit shared understanding of each other’s worldviews and to practice deep listening. We’ll devote an extensive amount of time after this meeting to expanding and dive deeper into this conversation. For now, we want to capture a quick picture of the collective understanding in the room.

To do that, I’m co-facilitating the exercise with Joe Hsueh, a skilled system mapper. Joe will be facilitating an extensive system mapping process after the meeting, so it made sense to use the same technique here not just as a capture method, but as a way to familiarize the group with the process.

Joe is a veteran. He’s been doing this for years, and he’s highly sought after. He not only has deep experience with mapping, he has a facilitation philosophy that is unusual for system mappers and that is strongly aligned with ours.

I’m no spring chicken either. I know what I’m doing in a room full of people. I also have a lot of experience dancing with mappers of all kinds, from dialogue mapping to graphic recording.

Joe and I have never facilitated together before, nor have we even seen each other facilitate, but we have a trust and respect for each other that would have allowed us to do this successfully cold. We spent an extensive amount of time talking through the process and exploring scenarios. Our preparation was more than adequate for us to do what amounted to a relatively straightforward exercise.

We decided not to settle for that. Joe braved some awful weather a few weeks ago to fly from Boston to San Francisco so that we could practice. We had spent plenty of time talking about the process. This was time for us to get up in front of the room, Post-Its in hand, and practice. Rick Reed and Ruth Rominger played the role of participants, then critiqued us as we reviewed our work together.

Even a little bit of practice surfaced flaws in our assumptions and different understandings of what we were doing. Most people wouldn’t have seen what we saw, but to us, it was the equivalent of stepping on each other’s toes on the dance floor.

And so we practiced and discussed and practiced some more. We discussed which color Post-Its to use in different situations and why, as well as our physical positions in the room. We figured out which exercises we could shorten and which ones required more time.

When we get together later this week to facilitate this exercise for real, everything will be different. Someone will say or do something that will once again force us to adapt on the fly. We’ll do just that, and we’ll do it skillfully. Improvisation is a huge part of doing this work well. However, as everyone who does any form of improvisation knows, you get better at improvisation — and dancing — by practicing.

In this field, most practitioners do not invest time for practice. Our mindset is that we can do a good enough job by relying purely on our experience. This is true. But ours seems to be the only field that talks about wanting to be high-performance, and yet settles for good enough. If we want to create a better future for ourselves, we have to stop settling. Practice is what will take us to the next level.

A certain level of humility is also required to embrace practice. I was particularly impressed by Joe’s learning mindset. I know a lot of practitioners who would stiffen at the thought of doing an “additional” walkthrough like we did, who would view that as an affront to their experience. I know a lot of practitioners — myself included — who don’t like “looking bad” in front of their peers. Practicing with others exposes your vulnerabilities. However, those vulnerabilities are the very reason you should be practicing in the first place. Joe didn’t seem to have those hangups. He was comfortable with how good he already was, but he wanted to get better.

In When We Were Kings, the documentary about Muhammad Ali’s legendary “Rumble in the Jungle” with George Foreman, several people noted that Ali focused almost entirely on his weaknesses during practice, and generally looked bad and vulnerable. We all know what that translated to in the ring. We as practitioners of a different sort could learn a lot from that example.