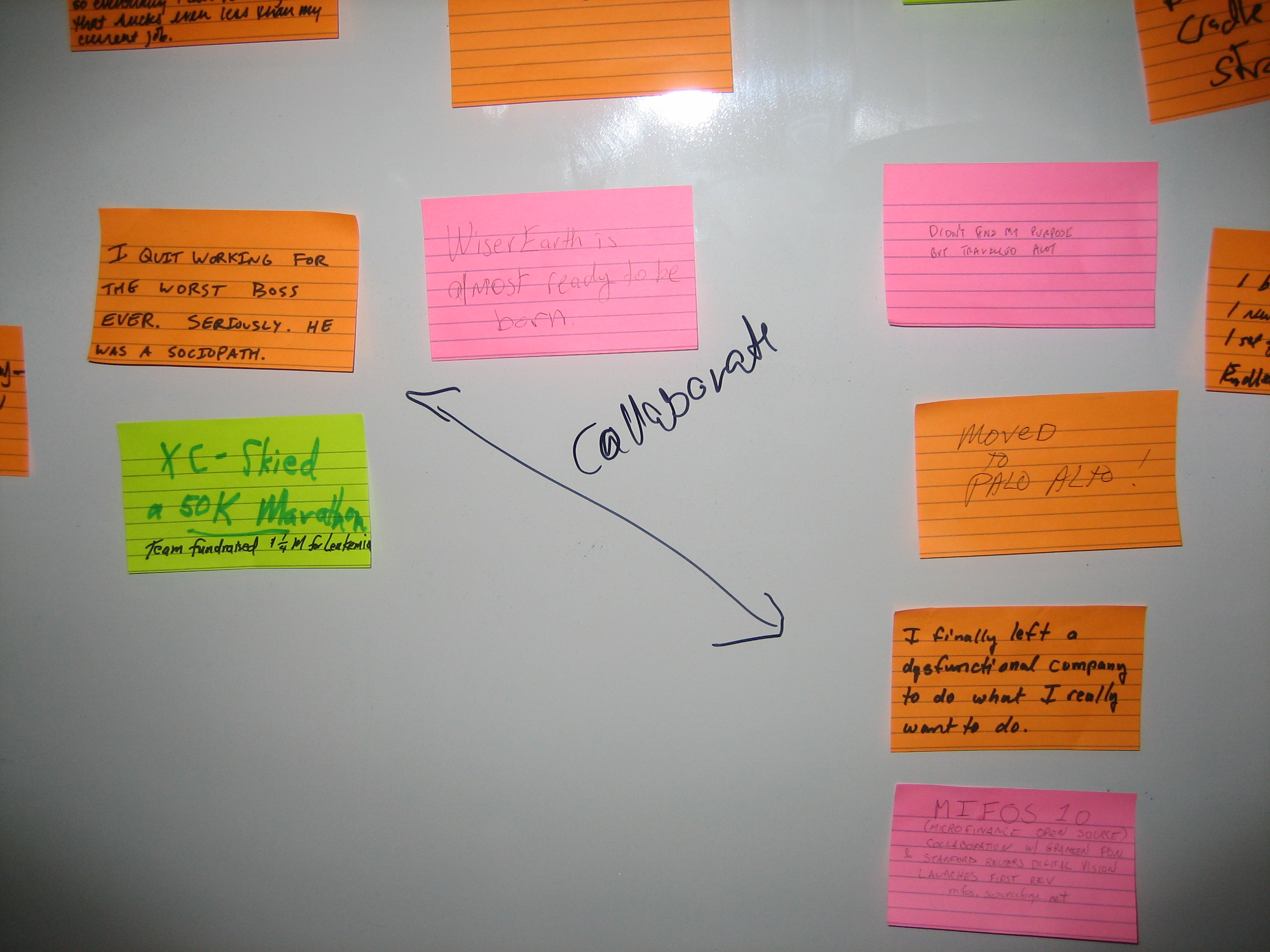 Part two of a three-part essay on facilitating group learning. See also part one, “Getting real about experiments and learning.”

A few years ago, my friend and colleague, Rebecca Petzel, wrote about a participatory art exhibit where the artist asked, “What is transformation?” One of the replies was, “Moving beyond documentation.”

I laugh every time I read this, but I also shake my head. How and why did documentation become so synonymous with learning (or worse, transformation)?

My mentor, Doug Engelbart, always said that the distinguishing characteristic of a high-performance group was its ability to learn and improve. One sign that a group was good at learning was its ongoing care and maintenance of what Doug described as a “dynamic knowledge repository.”

When people asked Doug what a “dynamic knowledge repository” looked like, he always described something digital. That made sense. Among the many things that made Doug a visionary was his recognition that digital technology had the ability to transform the speed at which we act and the quality of those actions. It’s something I still believe wholeheartedly.

But there was always something that seemed inconsistent and incomplete about how Doug described these knowledge repositories. For one thing, he used the word, “knowledge,” not “data” or “information” — both de rigueur terms of the time. For another, as much as he talked about the potential of tool systems, he also stressed the importance of human systems.

Knowledge can manifest itself as external artifacts, but those artifacts themselves are not knowledge. The essence of knowledge is that it’s actionable, and humans can’t act on knowledge unless it’s in their heads. I can have a whole library of books on nuclear physics, but it doesn’t become knowledge until I figure out a way to internalize what those books represent. I can read all the books I want on how to ride a bicycle, but it’s not knowledge until I actually demonstrate the physical ability to ride a bike.

I know that Doug understood this. I had many deep, wonderful conversations with him about this. Doug focused on the digital, because he was always looking at what was possible, which was way beyond what everyone else could see. That was one of his many gifts to the world.

Today, too many of us are fixated on digitally capturing our knowledge. That is the wrong place to start. We shouldn’t be so focused on externalizing what’s in our head in digital form. We should be looking at the problem the other way around — figuring out how best to get knowledge into our heads. That is the much more challenging and important problem.

How do we do that?

The number one thing we can do to help groups learn is to create space and time for reflection. How many of you take the time to do that with your groups?

Externalizing our knowledge can be a valuable way for individuals to reflect and internalize, but it’s only valuable for peers and colleagues if they take the time to absorb it. In theory, having access to written forms of knowledge — digital or otherwise — gives people flexibility as to when they can sit down and read it, which is one way to create time. However, that time is easily outweighed by the possibility that reading someone’s writings may be the worst way to learn something.

Last week, I wrote about my eight-year-old nephew’s physics experiment. He was learning by doing (i.e. experiential learning) and through mentorship and feedback. Would it have been better if I had written down everything I knew about physics and emailed it to him?

What if, instead of spending so much time, energy, and money on trying to get people to share more information digitally, we assigned people learning buddies? What if we incentivized time spent in reflection and with each other? What if we created systems for shadowing each other and for practicing the skills we need to be effective? Wouldn’t those be better first steps toward facilitating effective group learning?