A core strategy for navigating wickedly complex problems is to try to make collective sense of the system. Like the blind men and the elephant, we all have a narrow and incomplete view of the system in which we’re operating. If we could somehow see and fit each other’s pictures together, new and powerful insights and actions could emerge.

That’s the theory, at least. But how do you do this in practice? What does the process feel like? And how do you reconcile this approach with my earlier assertion that collective intelligence is not about enabling individuals to grasp the whole system?

At last week’s Garfield Foundation Collaborative Networks initiative kickoff, Joe Hsueh walked us through his answer by drawing this graph. (Joe himself explains the graph in the above two-minute video.) 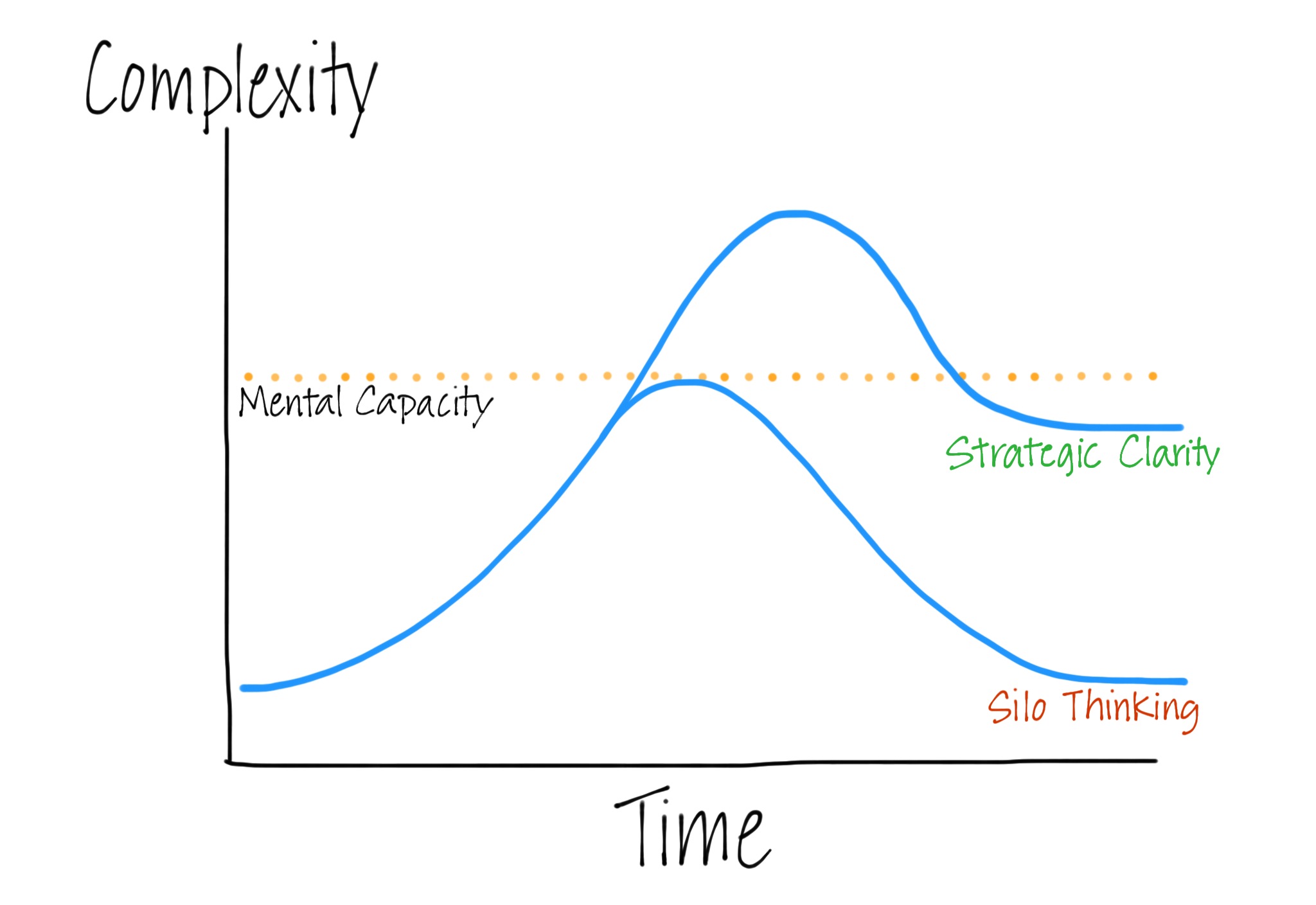 We as individuals try our hardest to navigate complexity until we hit our mental capacity. Generally, that experience is so exhausting and dissatisfying, we find ourselves dropping back into simplistic, siloed thinking.

The goal of a collective sensemaking process is to help individuals endure greater complexity than we normally can handle. At some point, we still have to simplify the system in order to process it as individuals, but the hope is that, by raising the overall bar, you end up at a higher place than you were before.

With system mapping (which is the tool that Joe so skillfully employs), the map itself is of limited utility to individuals who have not participated in its creation, because they have not gone through that process of mental endurance. This is a critical point. The real value of system mapping isn’t the final artifact. It’s the process of developing shared understanding by collectively creating that map.

An Aside on Facilitation

You can’t design or facilitate these kinds of processes effectively unless you yourself have a strong framework around complexity and systems thinking. Good designers create the space for participants to live in this complexity.

Living in complexity is inherently disorienting, and people have different appetites for it. Part of the facilitator’s job is to help the group maintain their faith in the face of intense discomfort. One way you can do that is by walking the group through your framework.

Unfortunately, I often see facilitators make the mistake of spending too much time explaining frameworks up-front rather than giving the participants the space and time to experience the framework. It’s a tricky balance, and finding that balance is a sign of mastery.

At last week’s meeting, Joe offered the framework at exactly the right time. You could see the relief on the participants’ faces as he explained that the joint struggle and frustration that everybody was experiencing was all part of the process.

It reminded me of a similar moment with one of my mentors, Jeff Conklin, during the Delta Dialogues in 2012. The participants were getting frustrated by how much the conversation was jumping around (which was by design), and I felt like we were starting to lose them.

Jeff stepped in, and drew and explained a graph that described the different ways that people learn. It was beautiful to watch people’s faces light up with understanding. Jeff’s impromptu (and brief) lesson in theory not only helped orient our participants, it gave them language to describe what they were going through.