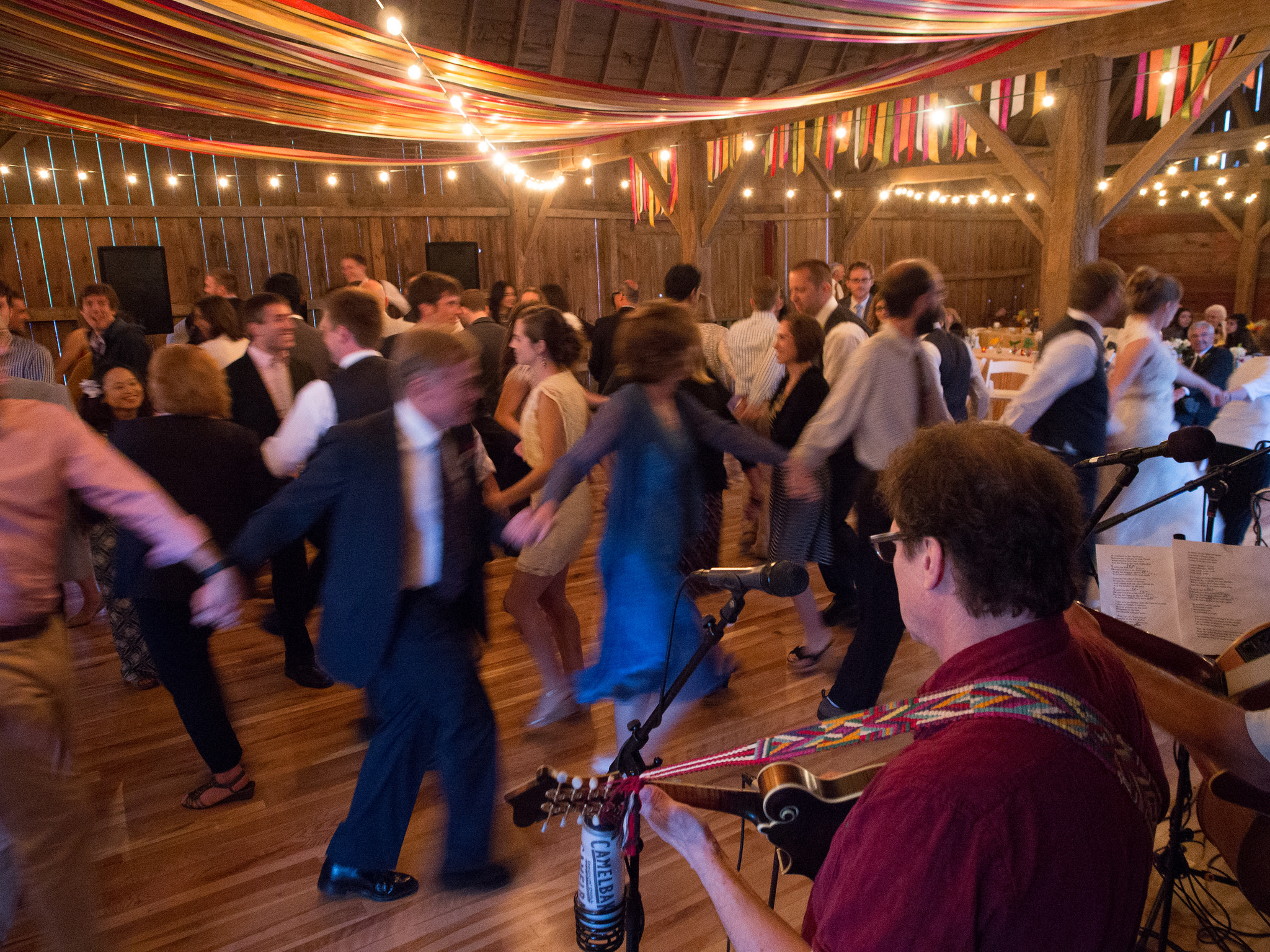 There is a central quality which is the root criterion of life and spirit in a man, a town, a building, or a wilderness. This quality is objective and precise, but it cannot be named…. The search which we make for this quality, in our own lives, is the central search of any person, and the crux of any individual person’s story. It is the search for those moments and situations when we are most alive.
—Christopher Alexander, The Timeless Way of Building

Life is about rhythm. We vibrate, our hearts are pumping blood, we are a rhythm machine, that’s what we are.
—Mickey Hart, Grateful Dead drummer, 1998 CNN interview

I strive to be a minimalist when it comes to designing and facilitating meetings, especially large ones. I get people into small groups as much and as quickly as possible, and I get out of their way. If I am thoughtful about the space I create, the questions I pose, and the tools I provide, then I can recede into the background, and the meeting runs itself.

When it’s working, I can feel the room vibrate. When people are engaged, when they’re leaning in, when they’re listening closely to each other, when they’re working, laughing, creating, converging, the group becomes alive. I can hear the group’s heartbeat, and I simply move along with it.

What makes groups come alive? I love Brooking Gatewood’s deceptively simple observation that what matters is that we feel like we matter.

How do we create conditions for people to feel like they matter? How do we support this, reinforce it, amplify it? There are no stock answers to these questions, and putting whatever answers you might have into practice is even harder.

If I had to focus on one thing, I’d start with rhythm.

Recent studies show that when people share rhythms with others they develop stronger emotional bonds and are more likely to pitch in for the common good. One study showed that even when a pair of strangers had never met before and didn’t talk, they still liked each other more if both simply walked in the same direction together, rather than in different directions.

When people share the same daily, weekly, monthly, and seasonal rhythms, connections among them form faster and stay stronger. The people trust each other more deeply, and coordination becomes easier because they see and experience the world in the same way. (pp212-213)

In our drive to focus on issues of “substance,” we tend to forget about issues of biology. The notion that simply moving together physically might improve performance can be hard to believe, even in light of the research, but we ignore this reality to our detriment.

When we work together face-to-face, it’s easier to establish rhythms without being conscious of it. People have natural habits, reinforced by physical space, and rhythms sometimes emerge on their own. Still, skillful practitioners are sensitive to these emergent rhythms, but also don’t leave it entirely to chance. It’s why we see things like standing meetings and checkins in so many successful processes. What happens during these rituals may actually be far less important than the fact that they are simply happening.

When we’re not physically in the same space, establishing what Lisa Kimball describes as a “visible pulse” is even more important. Lisa (who has the best company name in the business) writes, “Human systems that thrive have a pulse… a rhythm… that connects and aligns them with the source of life. The essence of relationship is being in rhythm with others. To co-conspire, to breathe together with a group is a big challenge for collaborative groups in the same room together. It’s even harder for groups that are not in each others’ physical presence.”

Many years ago, I met a Disney IT manager, who shared an unexpected solution to a very common problem they were having. His whole team was based in Burbank, California, with the exception of one person, who worked in the Orlando, Florida office. This person predictably felt out-of-touch with the rest of the team. They tried a number of tools and process tricks to shift this, but none of them worked.

Finally, they decided to set up a video camera and monitor in the hallway of the Burbank office, and they left it on at all times. They put a similar setup in the Orlando office. That did the trick. Being able to experience the hustle and bustle of his California colleagues in an ambient way helped give this person a greater sense of connection to his team and to his work.

This strategy of starting with something natural and amplifying it is generally smart, but it can also surface new challenges. At my previous company of seven people, we used a wiki as a central repository for all of our notes. This gave us full transparency into what everybody was doing and thinking, and it also gave us the ability to work effectively at our own pace.

Most people followed the wiki by subscribing to email notifications, which would get sent whenever somebody made a change. The problem was that I had a propensity to think and write early in the morning or late at night, which meant that people would often wake up to a slew of emails. Even though I didn’t expect anyone to follow my schedule, I was unintentionally establishing a rhythm that others rightfully found stressful.

I didn’t want to change my habits, which worked well for me, and I also didn’t want us to lose the benefit of the notifications as an amplification of a natural rhythm. Our solution was to create a piece of software that would collect the notifications and publish a whole set once an hour and only during business hours. As an added bonus, we named the tool after a colleague’s dog and had it bark and grunt encouraging commentary along with the notifications. 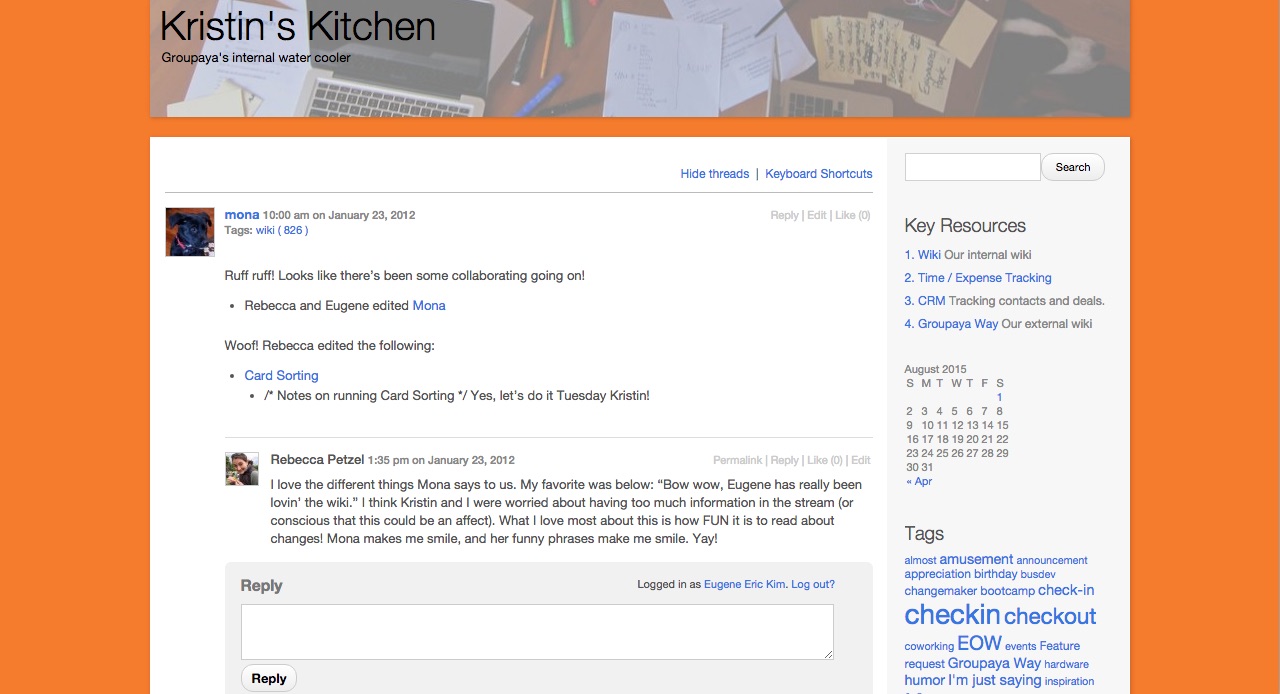 By taking behavior that was already happening and making it visible (and fun), we were able to establish a rhythm without any additional work. However, we needed to slow it down and curate it (both of which we were able to do automatically) in order for that rhythm to feel comfortable.

Understanding what rhythm will work best for everyone is part experimentation, part conversation. My friends at Forward Together, a pioneering reproductive justice organization, have a wonderful physical movement-building practice called, Forward Stance, which is a spiritual cousin to my Collaboration Muscles & Mindsets program. It includes one exercise that not only highlights the importance of rhythm, but enables people to have a concrete conversation about how to move in alignment at different paces.

This exercise gives people concrete language to discuss an issue that can feel somewhat abstract. We used it as part of our Future Forward project — which consisted of a dozen stakeholders across multiple organizations — to establish a sense of how we wanted to work together over the summer, when many of us would be traveling. The entire exercise took a grand total of seven minutes, and it helped us get specific in a way that simply talking about it would not have.

When we are collaborating at our best, everyone feels alive, and the group itself takes on a life of its own. By definition, groups that are alive have a heartbeat, a rhythm that everyone can follow.

What is the rhythm of your group?

Is everyone listening and moving to it?

If not, what might you do to establish a stronger pulse or to make it more visible?