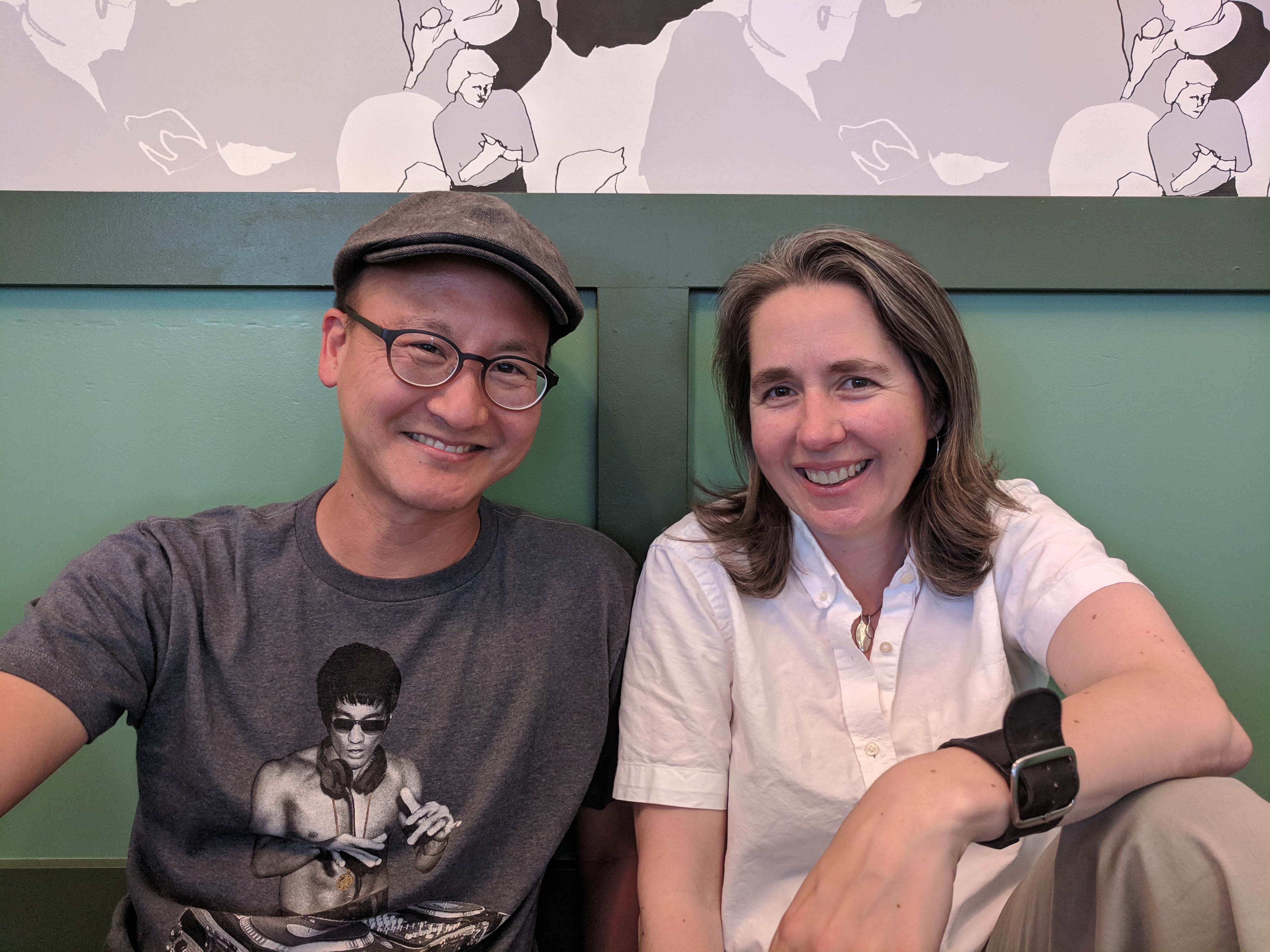 The two of us have never worked with each other.1 We share some values, interests, and colleagues, but we are in marginally related fields. Kate’s into fish and data, whereas Eugene is obsessed with all things collaboration.

Yet for the past five years, we have been taking an hour almost every week to check in with each other. It’s been one of our most valuable practices as independent practitioners, and we think you might find it valuable as well. Here’s how these check-ins came about, how and why we do them, and how you could do them too.

How We Got Here

We first met in April 2011 at a meeting about building networks for social change. Eugene wanted to make a point about the importance of reciprocity, and for some strange reason he brought a bunch of green pipe cleaners to help him do it. Stranger still, Kate got it immediately, fashioning one of them into a shark and remora and giving it to Eugene.2

In the ensuing three years, we mostly followed each other on Twitter, occasionally sharing a link or a snarky comment. Then, in 2013, Eugene decided to leave the consulting company he had co-founded, and a year later, Kate decided to leave her foundation job and take a semi-sabbatical. Kate reached out to Eugene to ask about his experience consulting. A few weeks later, Eugene invited Kate to be weekly check-in partners as part of a larger experiment in “colearning.” Kate wasn’t entirely sure what this meant but as she was trying to learn new skills, she decided to give it a chance.

On Monday, June 13, 2014, we had our first call. Five years and 170 pages of notes later, we’re still checking in weekly. We often lean on each other for advice, and we’ve both relied on each other to get through some tough times. Our real-life partners half-jokingly refer to us as work husband and wife.

What Is a Check-In?

Our check-ins are loosely structured. We maintain a standing time when we can. We talk for an hour, often a little longer. We usually talk by phone or video chat, but sometimes face-to-face, especially if there’s food.3 We talk about what we’re working on and what we’re thinking about, as well as what’s going on in our lives. We take shared notes while the other person talks, which helps us listen and see the patterns in our thinking. We laugh a lot, and we’ve cried some as well. Sometimes, we wrestle with a complicated problem or test ideas. Sometimes we go on silly riffs that eventually result in fruitful ideas.

We generally split the time — one of us starts talking about the week that’s passed and then hands off to the other — but we don’t time each other. Sometimes, one person needs more time than the other. We usually pick up on this quickly and give each other that time. This works beautifully, but we’re both self-conscious about taking up too much space, so we often stop and ask if they need a turn to speak.

There’s one thing we always do at the end of every check-in: We share a beautiful thing we saw or experienced. It can be surprisingly hard to remember a beautiful thing that happened during the week, especially if you’re having a bad day. Knowing that we are expecting each other to share something makes us both pay more attention to things that we think are beautiful.

What Are We Getting out of This? Why Are We Still Doing This?

We originally started check-ins because we wanted the collegiality, learning, and heightened performance you get from being in a good company without having to actually be in a company.4 As an independent operator, you may work with a team for the scope of a single project, but you have a specific task and then you move on. You don’t have regular contact with the same group over months or years, which can allow you to grow and improve from the group’s feedback over time. Checking in weekly was an important part of Eugene’s experiment, even though at first it seemed like a lot of time.

We quickly learned that frequency led to efficiency and depth. We didn’t have to spend the first 20 minutes of each conversation “catching up” and getting up to speed because we were already caught up. That meant we could dive into deeper issues faster. Our weekly allocated check-in time feels luxurious. It’s one hour where we get to say whatever is on our minds and we get to be heard.

Regularity and transparency also support accountability. We both had things we wanted to get done, and we knew the other person knew this, so when our next check-in rolled around, we got them done or tried to explain why we couldn’t. Soon, we started asking each other more explicitly to hold each other accountable, especially for the stuff we badly wanted to do, but often found ourselves delaying.5

One time, Eugene kept postponing a task until finally, he gave Kate $20 and said she could keep the money if he didn’t finish his task by the next check-in. He finished the task and got his money back… barely.6 Doing it together and making it silly helped, but talking through why he kept postponing the task helped even more.

Make your own Check-Ins

Why have our check-ins worked so well? It’s equal parts chemistry, timing, and practice. We like and respect each other a lot, we’re both reasonably self-aware and reflective, and we’re both constantly trying to get better. We’re both in the middle of our careers, so we’ve seen some things and have some skills, but we’re also still learning. We’re both supportive, but we’re also not afraid to speak our minds, and we’ve both given each other some tough love in the past.

Still, we don’t think we are outliers. We think that everyone would benefit from something like this. We’d encourage you to try it for a finite amount of time, then adapt. Specifically:

The beauty of regularly showing up and listening to another person is that it’s practice for all aspects of our work and life. It’s practice in helping others grow and evolve. It’s practice in giving yourself the space to be whom you want to be. We’ve benefited so much from this practice, and we think others would as well.

Eugene Eric Kim helps groups learn how to come alive and collaborate more skillfully together. He spent ten years consulting with companies across different sectors, from Fortune 500 companies to grassroots movements. He’s now focusing his efforts on helping others develop the same skills that he uses to help groups.

Kate Wing is a design strategist who works with clients to improve their impact, and has a particular fondness for all things fish. She founded the databranch to build better data and technology systems for conservation and she has a wide breadth of experience in the social sector, from philanthropy to government.

This is the fourth in a series of blog posts about building a network of collaboration practitioners. The others are: