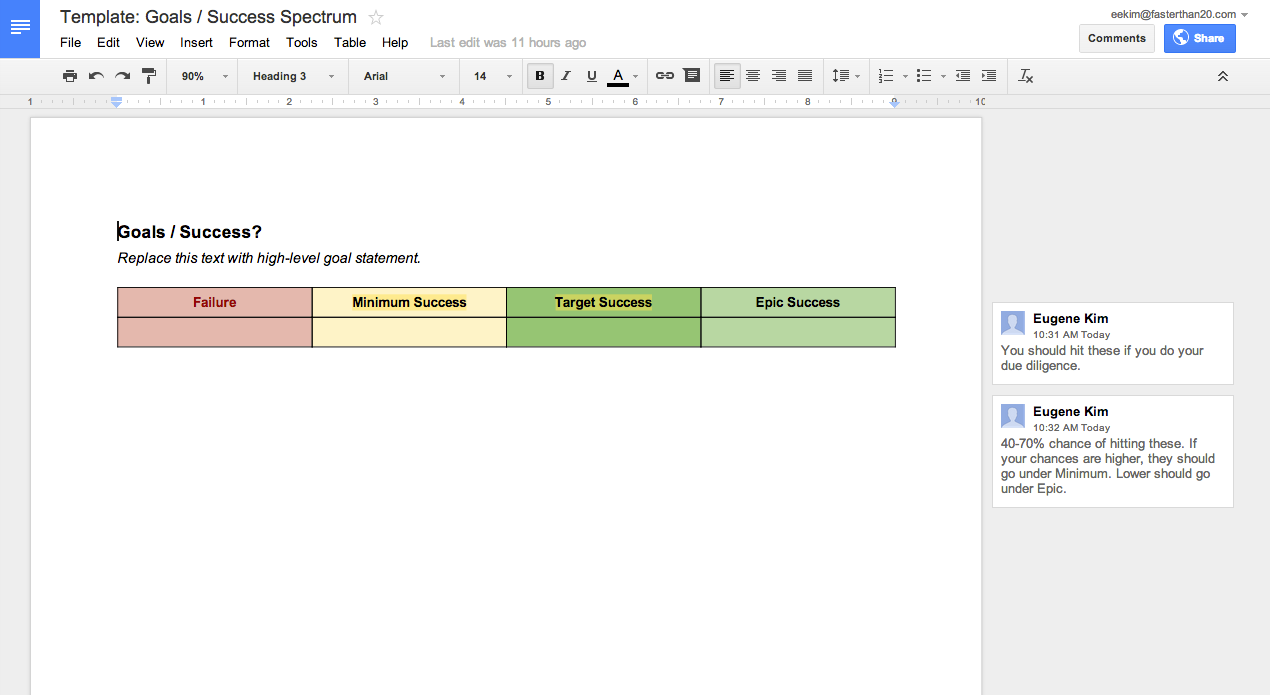 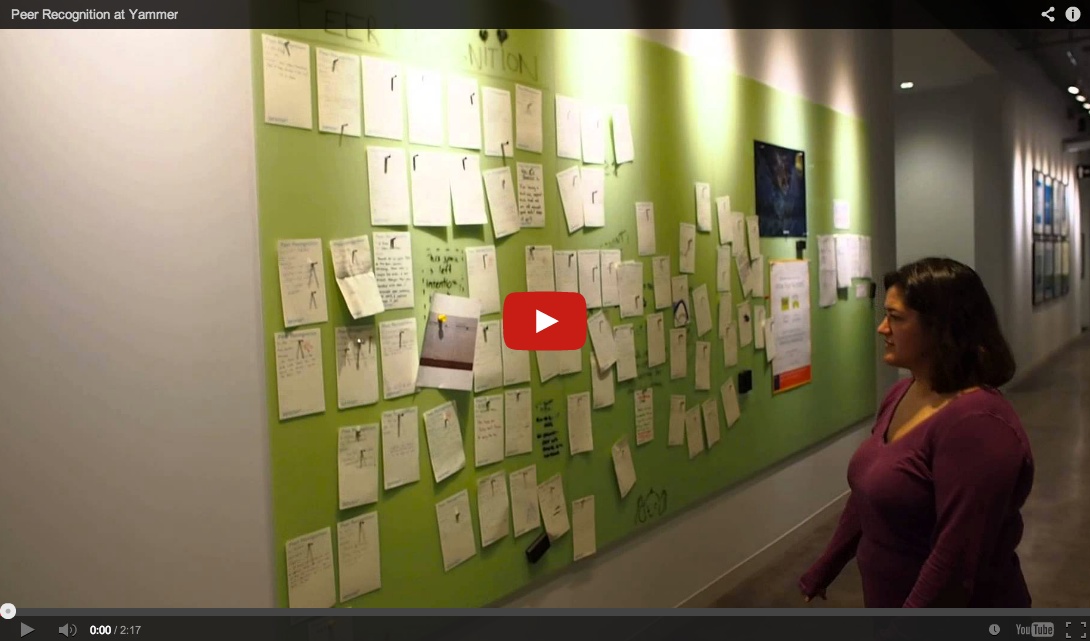 Last week, I shared Yammer’s “Big Board” hack, which gives the entire company transparency on who’s working on what. This week, I want to share another Yammer hack: a peer appreciation wall.

As Yammer’s Director of User Experience, Cindy Alvarez, explains in the two-minute video above, the hack is simple: Give people an easy, low-tech way to record and share things they appreciate about their peers.

As with its Big Board hack, Yammer leverages physical space so that people see these appreciations all the time. The person who came up with this hack originally thought she needed to offer an external incentive (fresh popcorn) to encourage people to share, only to discover that people found the act of sharing these appreciations rewarding in and of itself.

At my previous company, we invented a game that evolved into a wonderful way to express how much we appreciated each other. Hacks like these simply surface what’s already there. They’re simple, but powerful.

As 2013 comes to a close, I would encourage all of you to find a simple way to express your appreciation of a peer. It could be as simple as dropping him or her a short email. As always when it comes to feedback, be specific!

Happy Holidays, thank you all for being part of my community, and see you in the New Year! 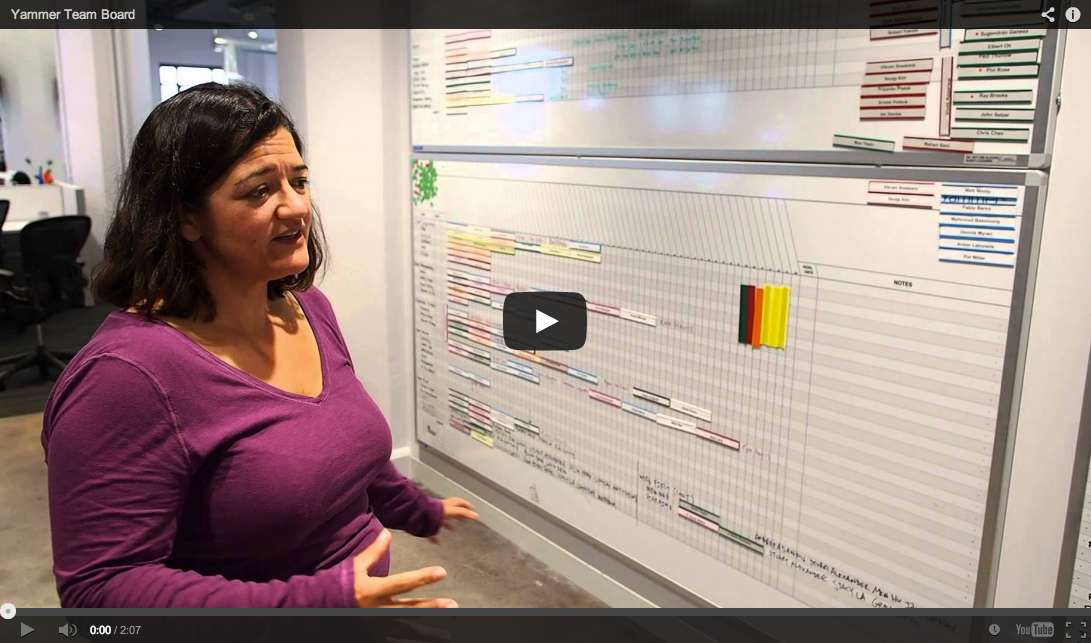 I firmly believe that a “hacker mindset” is critical for learning and improvement. Effective collaboration is more art than science. While the science is relatively straightforward, you need a willingness to experiment and play to master the art. This is the first of what I hope will be an ongoing “Hack Series” — simple, actionable, replicable hacks that have helped foster high-performance collaboration in real-life situations.

My friend, Cindy Alvarez, is the Director of User Experience at Yammer (now owned by Microsoft) and author of the upcoming book, Lean Customer Experience (April 2014). A few months ago, she invited me to talk with her team about what I’ve seen and learned over the years about collaborative cultures within companies.

Yammer is a collaboration tool for the enterprise. Think of it as a Twitter- or Facebook-like tool for your organization. Tools like Yammer are particularly good at enabling a culture of transparency within organizations, helping teams become more aware of what each other is doing.

However, organizations often resist this shift in culture, even if that’s why they bought the tool in the first place. Working “across silos” sounds great in theory, but it’s a very different way of working than most are familiar with. It means change, and people don’t like change, even if it would make things better in the long run.

In many ways, Yammer product designers (and even their engineers) are in the same business as me. They’re trying to help organizations become more collaborative. They happen to do this primarily through the design of their online tool. In order to design an effective tool, they use powerful methods for understanding how their customers think and feel and for measuring the impact of their interventions. Most process designers would do well to learn the tools of product design.

I had a wonderful conversation with Cindy’s team, and I particularly enjoyed the tour afterward. Yammer, the organization, embodies the culture it’s trying to instill in its customers. You can see this in every aspect of how it works, from its internal processes to its physical office space.

One of the brilliant hacks I saw there was what they call their “big board” (see the two-minute video above). In order to keep track of who’s working on what, they have giant magnetic whiteboards in a well-traveled hallway that list every project with every person in the company represented by a magnet. This has several important effects:

This hack embodies the simple, but powerful principle that my mentors, Matt and Gail Taylor, espouse: Work big. Yammer is a technology company, but they’re using an old-fashioned, physical tool to increase performance across the company. It’s worked so well for them that Microsoft is now implementing the same practice.

As Cindy mentions in the video, Yammer is currently trying to implement a digital version of the tool to accommodate its growing distributed presence. It will be interesting to see whether or not a digital version can be as effective as its giant physical inspiration.