Mindset Cards are a tool for building, transforming, and assessing culture in groups. They help us create a language to talk about mindsets and values. They make it safer and easier to have concrete, productive, courageous conversations about things that are important to discuss but that can often feel vague and ungrounded.

You can use them with groups of any size — from two people to hundreds, even thousands — and types — from small teams to large organizations, even your family and friends. They’re ideal for:

You can also use them individually for your own personal development.

We often behave the way we do because of what we think (mindsets) and believe (values). However, these are invisible, so unless we share these explicitly with each other, we have to guess to understand why people behave the way they behave. 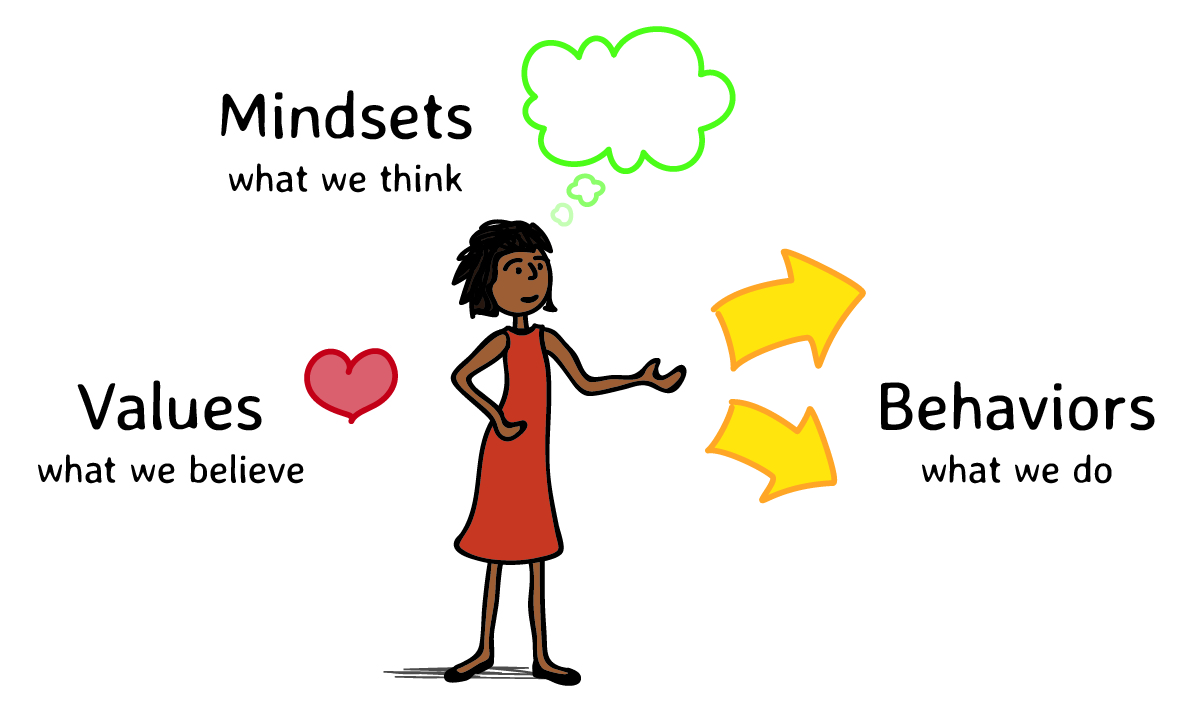 In order to do that, we have to invent language to describe our mindsets and values, and we have to tell stories to understand their meaning.

These mindsets were originally harvested from work that Eugene Eric Kim, Kristin Cobble, and Rebecca Petzel did together over several years at Groupaya working with organizations on culture change. We iterate these mindsets on an ongoing basis through testing and feedback.

(You can download a printable version of these instructions.)

All of the methods described below are variations of the following:

The language on each mindset card helps us get more precise about the kind of culture we want and don’t want. However, there is still a lot of gray area. You can get even more precise by creating mindset spectrums, which allows you to talk more concretely about not just what is desired, but how much.

This works best with one or two people. You can do it with more than two, but it’s better to use the Divide and Converge approach for that described below.

One variation of this exercise is to examine the tension between two productive mindsets that might potentially come into conflict. The exercise works the same way, except the aspiration will likely be more in the middle of the spectrum than toward the right.

If your assessment is below your aspiration, brainstorm with your group experiments for closing that gap. Keep in mind that mindset shift is hard, that it takes time, and that you’ll fail a lot more than you’ll succeed. You can repeat the assessment process to track your progress.

Note that self-assessments are not scientific. Treat these as an opportunity to talk with each other about important, sometimes difficult topics and to get aligned about where you are and where you want to go.

This is an alternative to Mindset Spectrums. This works best with one or two people. You can do it with more than two, but it’s better to use the Divide and Converge approach for that described below.

If you’re playing individually, you can cycle through your cards each day as a reminder of your intentions.

With both Start, Stop, and Continue and Mindset Spectrums, you’re ultimately trying to get to a handful of cards per pile or spectrums — 3-5 at most. For one or two people, this is a fairly straightforward prioritization process. For more than two, it can get complicated quickly.

Rather than try to prioritize as a whole group, we’d encourage you to do it as small groups, then come together.

This process can scale to literally thousands of people. To help you track the cards being chosen, you can use the index number on the bottom-right of each card.

It’s human to form tribes or factions. There are lots of good things that can come out of this, but it can also result in divisiveness and silos.

You can use this technique with either Start, Stop, and Continue or Mindset Spectrums to build greater unity and empathy. You could use this for:

It’s especially useful when there are complicated power dynamics.

Based on these discussions, have each group decide on the piles or spectrums they will be committing to.

If your group has already agreed on a set of core values, you can use these values to prune your deck and simplify any of the mindset exercises described above. Go through the deck, and take out every card that lists one of your values (or something similar).

Alternatively, if your group has not already agreed on a core set of values, you can do one of the mindset exercises above (either Start, Stop, and Continue or Mindset Spectrums), examine the cards you’ve chosen, and use the values listed there as a candidate list of values for your group.

There is no wrong way to use these cards! Practice and play.

These Mindset Cards are part of a larger DIY Strategy / Culture toolkit, which also includes:

For more on the design philosophy of these tools, read, “Balance Bikes for Changemakers” (January 16, 2018).

These cards were created by Eugene Eric Kim and Amy Wu with considerable contributions from Rebecca Petzel and Kristin Cobble.

Kristin Cobble first introduced the mindset framework to Eugene in 2010, and it formed the basis of several of the projects they did together with Rebecca Petzel at Groupaya. Eugene conceived of these cards as a way to make this work more accessible to others. In 2014, he did an initial harvest with Rebecca and created the first versions of these cards. Soon thereafter, he partnered with Amy to take these cards to the next level.

We are indebted to the Garfield Foundation, which supported much of Eugene’s early efforts with these cards, and to the many people who have contributed ideas and feedback and who have prototyped these cards. They include:

This work is public domain.