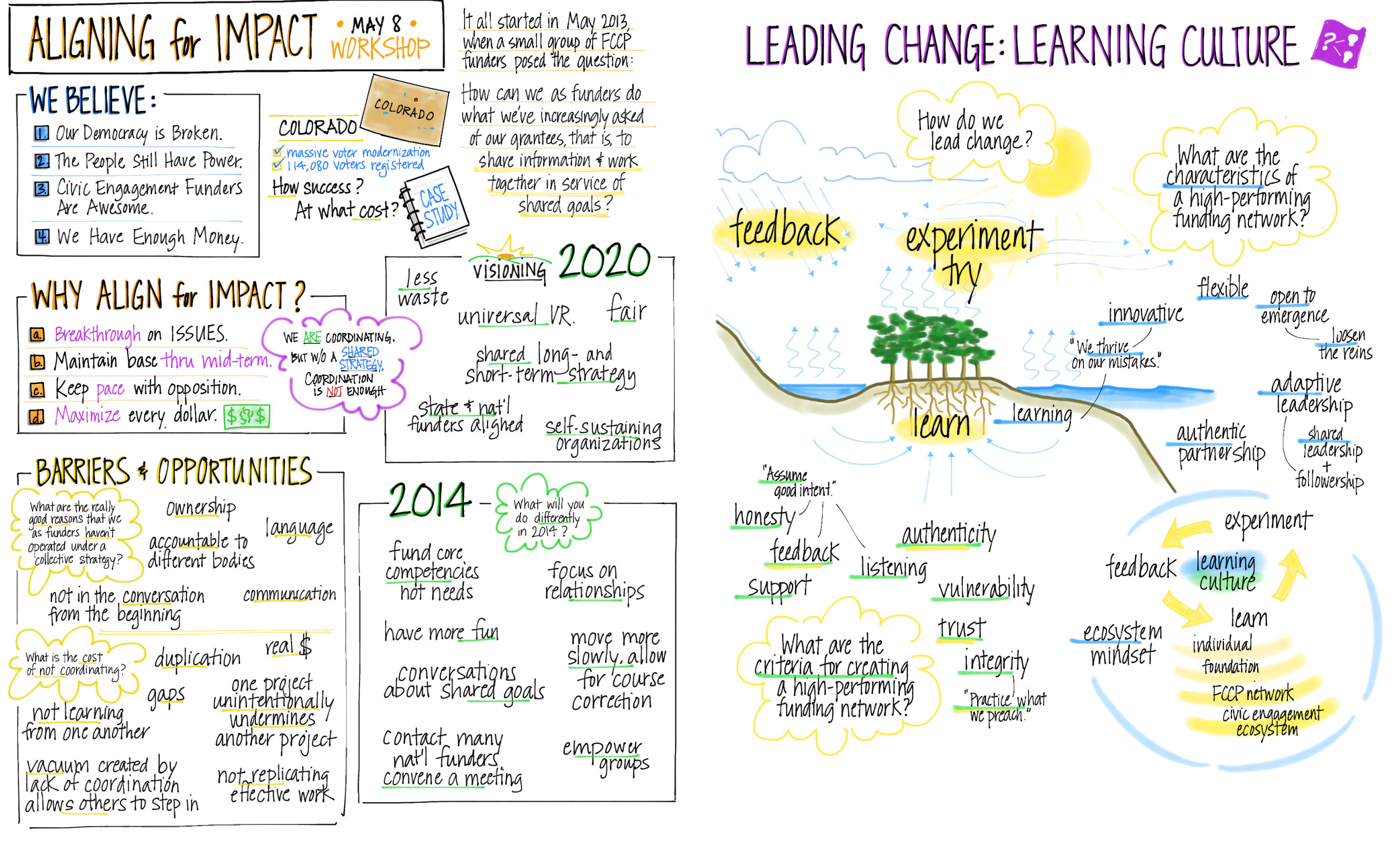 Last year, a small group of foundations who fund state-wide civic engagement (the State Infrastructure Funders Table, or SIFT) embarked on a small, but important experiment, facilitated by my friend and colleague, Rebecca Petzel.

These foundations believe that democracy in the U.S. is broken, that it’s serving the interests of the privileged over the public. They have funded many successful initiatives to try and address this problem, but they continue to face tremendous challenges, many of which are a result of poor collaboration. Specifically, different philanthropic strategies often end up crafted in isolation from each other and therefore miss opportunities to align around common goals, especially when it comes to state versus national funders.

These foundations see similar challenges with communication, coordination, and collaboration among their grantees and have asked them to work in networked ways. But the foundations themselves have not been modeling that behavior.

Looking for a better way, Renee Fazzari of General Services Foundation and Mary Tobin of McKay Foundation wanted to see if they could get a small group of funders aligned around vision and strategy, and they asked Rebecca to help them design and facilitate that process. Twenty-five funders representing 12 different states participated in this three-months conversation, which was mostly virtual and which culminated in a two-day face-to-face retreat.

At its core, this project was about creating a space for funders to have a different kind of conversation with each other. It was about getting them to slow down, so that they could work smarter. The process surfaced discrepancies in their theories of change and the language they used to describe them, it strengthened their relationships, and it created a strong commitment to do something even bigger together.

The success speaks to the skill of both the facilitation and the participation. I got a chance to watch the process from afar, and I saw many things that were particularly innovative. The process was mostly virtual, which contradicts the widely-held view that a face-to-face kickoff is the best way to build the relationships and shared understanding necessary for success.

The virtual meetings were designed with the same care as face-to-face meetings, with strong technical support, checkins and checkouts, breakouts, breaks, and most importantly, shared display. All of this lent to a feeling that participants were in the same “room” together, and participants were shocked by the high levels of energy and enthusiasm that were maintained throughout the two-hour calls. Participants took shared notes during breakouts, and Rebecca used Dialogue Mapping to capture and facilitate full-group conversation. They then synthesized these notes, with the help of creative consultant, Amy Wu, into a beautiful visual storybook that told the story of their work.

By chance, I happened to catch Mary, Renee, and Rebecca in the same place earlier this week, and they graciously allowed me to put them on the spot and record some of what they learned on video. Unfortunately, as is often the case with networks of busy people, I could not catch all three of them at the same time, so I took two 15-minute videos — one with Mary and Renee, the other with Mary and Rebecca. This actually nicely models a good network practice — talk in clusters, leave a trail — and I’m happy to share what they said here.